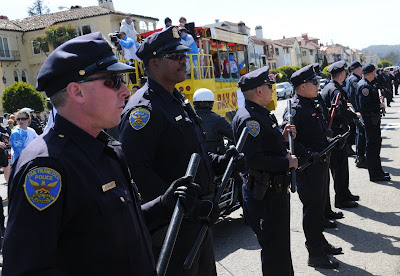 More to come, as I am sitting in the airport waiting for my next flight, but a few initial thoughts on and shots of the torch run. First and foremost, the Tibetan and Darfur movements had shifted tactics for the San Francisco run, after the publicity in London and Paris began making the protesters look less than credible and their causes were falling prey to the images of them going after the designated torch runners. It is one thing to oppose China's activities or even to use the Olympics to draw attention to issues with China, quite another to physically threaten the athletes and individuals who have the once-in-a-lifetime chance to hold the Olympic flame. So in San Francisco, the targeting of the torch was more designed to impede movement rather than to extinguish the flame or steal the torch. However, even that goal was largely thwarted by the shifts and changes in the ultimate route the torch took. Rather than using any of the pre-arranged routes (which had been changing daily anyway), the torch went the opposite way, and uphill, making it difficult for the demonstrators, when they finally found out where it was, to get there. All told, in the initial survey of the pre-announced route and in chasing down the torch once it changed routes, I walked and ran some 11 miles, mostly up the San Francisco hills. Tiring work just to see the torch. Security around the torch was significant. Rather than blocking the route, they had a mobile blockade that would shut things down basically one or two blocks at a time so there was no easy location for the demonstrators to congregate to ambush the torch relay. In addition, there was a line of police with batons up both sides of the street as the torch passed through, keeping all demonstrators and spectators off the street. There were also motorcycle and bicycle police, federal security around the torch (joined by a few of the Chinese government security forces), and in general one could rarely see even the torch above all the security, much less the torch bearers. In the end, the torch relay faked out the final attempt to delay things, and took the exit just before the Golden Gate Bridge, heading to the airport quickly and quietly. The Chinese had paid several hundred pro-Chinese demonstrators to show up early and line the planned route, waving Chinese, Olympic and USA flags (pretty much only the pro-China demonstrators waved American flags; the anti-China protesters didn't, and that was quite noticeable. The Chinese are getting better at this sort of thing). One of the organizers of the Chinese said they had spent something like $30,000 on food and supplies, but I could not verify this (though there were boxes of bulk water, snacks and tissues with each clump of Chinese demonstrators). The Chinese also had a few quality English speakers with each clump who questioned the American pro-Tibet demonstrators and challenged them, usually starting off asking if they had even ever been to Tibet. And the Chinese paid for an air sign just like the anti-Chinese demonstrators, the Chinese sign, towed by a biplane, saying "Tibet will always be a part of China." Among the demonstrators that turned out was a large contingent of pro-Tibet activists, a moderate Safe Darfur contingent, and then Free Burma, Uighur independence, Pro-Taiwan and a few assorted others. Not a single Falun Gong that I saw. There was more serious security incident, when pro-Tibet activists blocked a bus carrying Olympic torch bearers and Chinese security. During the evacuation of those on the bus, the protesters jumped on the bus, smashing the the windshield, and spray painting "Free Tibet" on one side. Aside from that, there were a couple of scuffles between pro- and Anti-China activists, and a few tossed water balloons at the torch. A few pictures below, more later. 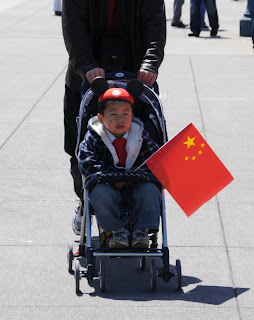 One of the youngest pro-China demonstrators. The Mickey ears help emphasize that the pro-China contingent was not anti-American (many waved American flags with their Chinese flags). This was a key part of their PR plan. 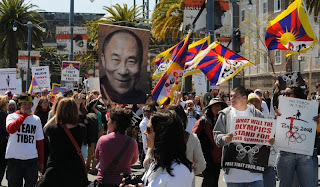 The largest number of demonstrators were pro-Tibet, but only a few ever made it up to the actual torch route, most ending up staying down on the initially planned route.

Security cordon was so thick that at times you could barely see the torch, much less the runners. It sort of defeats the whole purpose, and there was a conspicuous absence of any sign of the Olympic sponsors, who really didnt want to be caught up in the potential PR nightmare. 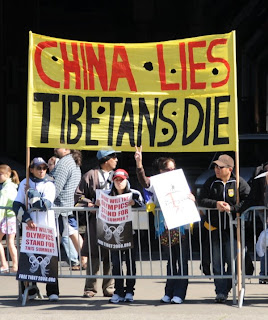 It doesnt really rhyme, but this was the most common chant. 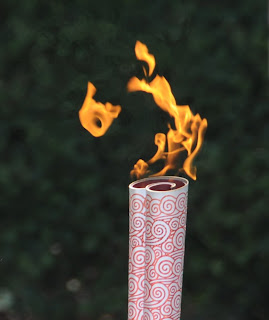 It is really outstanding, your blog! I did not even want to leave the web page because everything is arranged so perfectly well and the content is so interesting that it attracts everyone’s attention. Thank you very much for such a great pleasure and interest! I’ve already made your blog a part of my favorite links and will visit it many more times