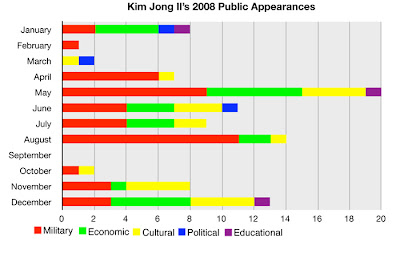 North Korean leader Kim Jong Il was rather busy in 2008, despite his August stroke. By far the two individuals named alongside Kim during his public appearances in 2008 were Korean People’s Army (KPA) Generals Hyon Chol Hae and Ri Myong Su, with 52 and 47 named appearances respectively [See below for methodology in assessing appearances]. Coming in a distant third was Kim Ki Nam, Secretary of the Central Committee of the Workers Party of Korea (WPK), with 21 named appearances alongside the Dear Leader. Perhaps most notable about Kim Ki Nam’s appearances, however, is that only one was made after Kim re-emerged following his stroke, and that on November 5, Kim’s first reported public appearance following his incapacitation.

The change in who Kim appears with is not the only change in his schedule before and after the stroke. Perhaps most notable is his penchant for cultural events after returning to the public stage - most likely because such large-scale events give many people the opportunity to see Kim while requiring little physical exertion from him and allowing little close inspection of his physical status, as he can sit up in his special box waving down to the crowds below. Notable also is that, while Kim makes sure to make inspections of military units following his return, they are a far cry fewer than in the months preceding his stroke. But despite the lower number of visits, there is a very strong military presence accompanying him in each of his public appearances following his stroke - most notably the above mentioned Hyon Chol Hae and Ri Myong Su, who were named with Kim on 20 and 18 occasions respectively following Kim’s return to the public spotlight.

A few other shifts in the people appearing with Kim include WPK officials Jang Song Thaek, Kim Yang Gon, Ju Kyu Chang, Ri Jae Gang and Ri Jae Il, who appeared much more often with Kim after his stroke than before. This may indicate an adjustment in balancing the powers within the WPK, but also ensuring the WPK remains linked in to the plans of Kim as he lays the groundwork for succession. Among the KPA officials, General Kim Myong Guk and KPA Air Force Commander Ri Pyong Chol are notable additions beside Kim post stroke, as opposed to pre-stroke.

One oddity is the appearance of Cha Sung Su, Chairman of the Radio and TV Broadcasting Committee of North Korea, who has one appearance with Kim prior to the stroke and two following the stroke. Cha was last named at a public appearance of Kim in 2006. His two appearances in 2006 were at musical performances, as were two of his appearances in 2008. But Cha also accompanied Kim on a visit to the Pyongyang Zoo on December 1, which doesn’t seem to match his prior appearances this year or in years past. It perhaps reflects Kim’s desire to make sure that there is plenty of public exposure in North Korea to counter the reports of his stroke and possible incapacitation spreading from South Korea and China into North Korea.

[Methedology Note: All reports of Kim’s public appearances are taken from the Korean Central News Agency (KCNA). For this review, a single KCNA report counts as a single visit, even if it included multiple factories or locations. A military visit is one to a KPA unit or sub-unit. An economic visit is one to an industry or infrastructure project. A cultural visit is one to a concert or performance (even if performed by a military troop), a sporting event or a visit to commemorate Kim Il Sung or some significant date in DPRK history. Political visits are those that involve foreign political visitors or Supreme People’s Assembly meetings (Kim didn’t attend any of the latter this year). Finally, an educational visit is one to a university, training institute or library. this is not all exact, but used for general comparisons, and assumes for this look that all visits by Kim Jong Il took place as reported in KCNA.] 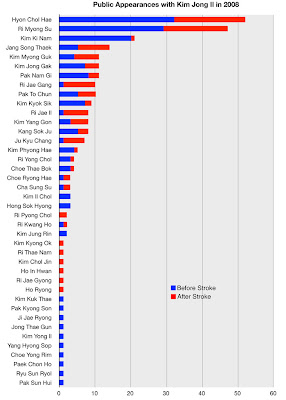