DPRK - of missiles and regime stability 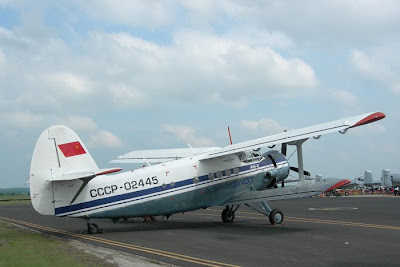 South Korean media has speculated that North Korea’s latest short-range anti-ship missile tests were air launched, rather than fired from ground or sea-based platforms. This would mark an advancement in North Korean capabilities if true, and would explain the increase in recent years of KPA Air Force exercises despite fuel shortages, and visits to air-bases by Kim Jong Il.

Now, there are some oddities to the reports. First, some have suggested that North Korea fired the KN-01 (or AG-1) anti-ship missiles (based on the Chinese Silkworms/Seersuckers) from an AN-2. The Antanov AN-2 is a Russian-designed large biplane, still used in North Korea for troop transport and cargo flights, and still seen lying around in other parts of the world (there was a field full of them at the airport in Ulan Bator last time I was there, sitting unused and decaying), and sometimes one sees them making the airshow circuit (as in the attached photo from a stop in Texas a few years ago).

While it would certainly be interesting if somehow they had modified the AN-2 to carry the nearly 2000kg KN-01/AG-1 (the cargo version of the AN-2 carried a load of 1500kg), and to somehow launch it from inside or modify the carriage to handle the more than half-meter diameter missile under the wings or fuselage that sit so low to the ground, it seems rather unlikely. Not impossible, given north Korea’s ability to MacGyver pretty much anything and everything, but highly unlikely. Of course, given the AN-2’s extremely slow stall speed and ability to fly extremely low, one would think that it may be possible to fly an AN-2 below radar level for some distance before needing to gain lift for the launch of the missile. An interesting prospect, but not likely.

Rather, the other bit of speculation from ROK is that Pyongyang used an IL-28 Beagle, an old Soviet light bomber, to launch the missile. This would make more sense, regarding airframe compatibility and functionality. The Beagle could serve North Korea as a maritime interdiction aircraft, to back up its surface combatants, and in fact Pyongyang has been raising issues of control and sovereignty of the contested or ill-defined zones of the West Sea as of late, confronting not only South Korea but China as well for control over the crab and other fishing grounds, but also in an attempt to expand North Korea’s access to the area. The IL-28 carrying anti-ship missiles on patrol in North Korean waters would require a slight modification of the posture of South Korean and Chinese naval assets in the area, but is still a far cry from bringing North Korea up to par with its neighbors’ capabilities.

Still, despite economic problems, rumors of social crises, and questions of succession, North Korea’s military development seems to be steady and progressing, rather than stagnant (for everything but missile development) as we had seen in the past decade. It suggests stability of the regime to continue to develop long-term enhancements to the North Korean military structure. Foreign desire to see instability in the North Korean regime may be more wishful thinking than based on reality.