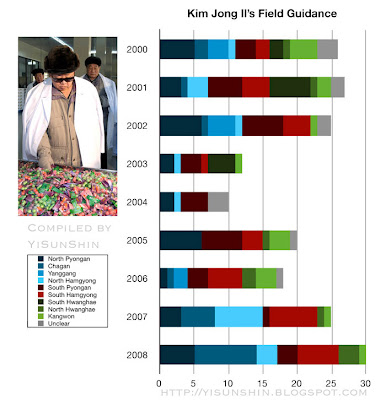 Here is a little something I have been fiddling with lately. It breaks down Kim Jong Il’s (non-military, non-art performance) field guidance visits by province. (This is an approximation, and there is an explanation of methodology below.) So what does it show? Well, we will begin with an assumption that Kim’s visits to certain economic activities demonstrate a particular focus on that economic project or sector. This may be inaccurate, but it will be our starting assumption: Kim Jong Il makes visits for a reason, and in some ways that reason can be deduced from the topic of the reported visit.

So first, it becomes clear that South Hwanghae province gets the shaft. This is somewhat interesting, as it is South Hwanghae that is shut off by the Northern Limit Line (NLL) that Pyongyang always complains about. It may simply reflect an insecurity of traveling to the province, though we don’t know that Kim doesn’t make regular visits there as part of his military tours. Or it could be that the province really isn't an economic priority, particularly with the NLL issue (most port upgrades have been in Nampo, just north of South Hwanghae, or across the Peninsula in Wonsan, so Haeju continues to sit in relative decline).

But aside from the under-visited South Hwanghae province, if these do reflect economic priorities, a couple of other things stand out.

In 2000 and 2001, there is a fairly strong focus on provinces that border South Korea (represented by shades of green), which makes sense given the 2000 summit between Kim Jong Il and Kim Dae Jung and the massive increase in the focus on cross-border projects. In 2002, there is a rapid drop in Kim’s visits to non-military projects along the border, as Pyongyang seeks to understand George Bush’s “Axis of Evil” remark.

In 2003 and 2004, economic projects at home were not a priority at all. That is not all unbelievable - at the time Pyongyang was concerned that Washington was going to declare “mission accomplished” in Iraq and turn its bomb-sites to another “Axis of Evil” member, North Korea. Really, economics take back seat to physical survival, and the tensions in the US-DPRK relations appear clearly reflected in these numbers.

What is perhaps most notable is the disproportionate attention to the four northern provinces (represented by shades of blue) in 2007 and 2008. It has always been conventional wisdom (a warning factor if there ever was one) that the northern provinces were the lowest priority for North Korea, that they were the least agriculturally and economically viable, that they were where the politically unreliable were sent, and that, if there were famine or other social problems in North Korea, they would be disproportionately represented in these four provinces along the Chinese and Russian borders.

It could be just a reflection of more attention to the places where Kim houses his long-range missile bases, but it may also be both a way to rebuild the support and loyalty of the disenfranchised politically unreliable class and to strengthen the border region with China, the latter both as a security measure and as preparation to replace the economic cross border activity along the DMZ with new economic zones along the PRC border. The most attention is given to Chagang (Jagang) province, one of the least developed of North Korea’s provinces. Kim has paid considerable attention to the province of late, something that may bear watching.

[Methodology Note: All reports of Kim’s public appearances are taken from the Korean Central News Agency (KCNA). For this review, a single KCNA report counts as a single visit, even if it included multiple factories or locations. For this chart, Field Guidance events are those to a factory, recreation area, business or infrastructure project. Those labeled in the “unclear” column are visits that, though not via exhaustive measures, it could not be determined exactly which province they occurred in. This is not all exact, but used for general comparisons, and assumes for this look that all visits by Kim Jong Il took place as reported in KCNA.]
at 5:41:00 AM