Who Hangs with Kim Jong Il? 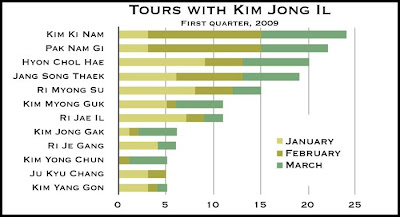 So I have been a little slow lately, but here are the results for the top 12 most-seen with Kim Jong Il for the first quarter of 2009. Two Workers' Party of Korea folks beat out the top Generals for the most reported appearances* with Kim this time around. Below are some mini-bios of some of these folks. If you spot errors, or have additional info to flesh these out, feel free to contact me (yisunshin@aol.com). These are based off of open source information (some from foreign language - you would be surprised how much the Chinese discuss Pyongyangology), and are thus subject to the rumors, mis-information and general lack of clarity associated with the topic. I have almost completed the mini bios of all 12 on the list, and will likely just update this entry when they are complete.

*Based on visits reported in the English language KCNA. For this study, each individual article counts as a single appearance, even if multiple locations were visited.

A shaper of North Korean image and propaganda, Kim Ki Nam was born August 28, 1926 in Wonsan, and began his studies at Kim Il Sung University before the outbreak of the Korean War. He also spent time at Moscow University. After a nearly decade-long teaching stint at Kim Il Sung University, Kim Ki Nam shifted into journalism in the mid 1960s, working at Rodong Sinmun (“the organ of the Central Committee of the Workers' Party of Korea”) and Kunroja (“the politico-theoretical magazine of the WPK Central Committee”).

Kim Ki Nam made 24 reported public appearances with Kim Jong Il in the first quarter of 2009, ranking first among North Korean officials. In 2008, he ranked third for the year, with 21 appearances, behind Generals Hyon Chol Hae (52) and Ri Myong Su (47).

A key member of North Korea’s economic team, Pak Nam Gi was born in 1928 in Haeju, and studied at Kim Chaek University of Technology in North Korea, and studied abroad, before beginning work in economics. In 1976, Kim became Vice Chairman of the State Planning Commission (visiting Russia in this position in 1984, and leading an economic delegation to Austria and Finland in 1985) and was promoted to Director in 1986. In 1984, Pak Nam Gi became a Secretary of the Central Committee of the Workers’ Party of Korea, but apparently lost the post in 1986, only to regain it and then lose it again in 1993. He was re-appointed a Secretary around 2003, and held the title in 2004 press releases, but no in 2005.

In 1985, he was named to the Economic Policy Commission of the Central People’s Committee, and in 2003 became Chairman of the Budget Deliberation Committee of the Supreme People’s Assembly (a position he had held earlier, but lost in 1993, when he was appointed Chairman of the Pyongyang Municipal Administrative and Economic Committee). Pak Nam Gi was a member of the North Korean delegation for economic talks during the 2000 inter-Korean summit in Pyongyang, and accompanied Kim Jong Il on trips to Russia (2002) and China (2006).

Pak Nam Gi was present at 22 of Kim Jong Il’s public appearances in the first quarter 2009, second only to Kim Ki Nam. He made 11 appearances with Kim Jong Il in 2008, tying for fifth place with Kim Myong Guk and Kim Jong Gak.

An important player in maintaining the political loyalty of the military, General Hyon Chol Hae was born in August 1934, leaving him just shy of 16 when the Korean War broke out (though he was reportedly one of Kim Il Sung’s bodyguards during the war). Hyon Chol Hae studied at the Red Flag Mangyongdae Revolutionary School, Kim Il Sung University and studied abroad in Romania.

As a Lieutenant-General, Hyon Chol Hae became Director-General of Military Logistics for the KPA in 1991, and was promoted to the rank of General in April 1992. A year later, he took up a position in the Central Committee of the Worker’s Party of Korea, and has served as a deputy to the 10th, 11th and 12th SPA sessions. Hyon Chol Hae is currently Deputy Director of General Political Bureau (a position he took in 1995), serving directly under Vice Marshall Jo Myong Rok. He accompanied Kim Jong Il on a 2001 visit to China.

Jang Song Thaek, Kim Jong il’s brother-in-law (married to Kim Kyong Hee), has had a tumultuous ride in the inner circles of Korean power. Born in February 1946 in Kangwon province, he studied at Kim Il Sung University (where he met Kim Kyong Hee) and Moscow State University. His marriage to Kim Jong Il’s sister was purportedly opposed by Kim Il Sung, who relented only after countless tantrums by his daughter and the intervention of Kim Jong Il.

In 1975, Jang Song Thaek was given a position in the Guidance Department of the Central Committee of the WPK, only to be removed in 1978 and sent to a factory for re-education (either because he was caught throwing lavish parties, or because he was linked to a relative who was purged around the same time for opposing the positioning of Kim Jong Il as Kim Il Sung’s successor). Jang Song Thaek was re-instated after a few years and promoted to Deputy Director (1982) and then Director (1985) of Youth Labor for the Central Committee of the WPK, where he oversaw construction projects ahead of the 13th World Festival of Youth and Students in Pyongyang in 1989. Jang served as a delegate to the 9th, 10th, 11th and 12th SPA sessions. He became an alternate member of the Central Committee of the WPK in 1989 and a full member in 1992. Sometime between 1992 and 1995 he was named First Vice Director of the Guidance Department (where he had worked briefly in the 1970s), a position he held until around 2004, when he was again purged, purportedly for plotting the overthrow of Kim Jong Il, or at least of whatever successor emerged after Kim Jong Il.

Jang Song Thaek was again rehabilitated in late 2005, but given the reduced position of First Vice Director of Workers organization. In 2007, he was promoted to Department Director of Administration for the CC of the WOK, and returned as First Vice Director of the Guidance Department in 2008, following Kim jong il’s stroke. During Kim’s convalescence, Jang served as a key liaison between Kim and the rest of the government. By some accounts, Jang and Hyon Chol Hae were effectively running North Korea for several months after Kim’s stroke, and Jang’s appointment to the National Defense Commission at the April 2009 SPA session appears to confirm Jang’s rising power.

Born around 1937, Ri Myong Su has for the past half decade, been one of the most frequent participants with Kim Jong Il on his inspection tours. Ri has reportedly been close to Kim since the 1970s, and played a role in maintaining stability during the transition from Kim Il Sung to Kim Jong Il following the elder Kim’s death in 1994.

Ri was curator of the National Liberation War Memorial Hall in the 1980s, and in 1993 was chief of the KPA Third Corps (which is responsible for the west central area including the area surrounding Pyongyang). Three years later, Ri was promoted to Deputy Chief of the General Staff of the KPA, became Director of the KPA Operations Department in 1997 (serving in the position until 2007), and was promoted to full General in 2000. Ri was given his position in the NDC in 2007. Ri led a military delegation to Russia in October 2002, as one of the numerous North Korean nuclear crises was kicking off. Ri was a Deputy to the 10th and 11th SPA (1998, 2003) but not on the list of deputies to the 12th SPA in 2009.

Ri Myong Su appeared with Kim Jong Il 47 times in 2008, second only to General Hyon Chol Hae. In the first quarter of 2009, Ri made 15 appearances with Kim, ranking fifth.

Kim Myong Guk served as Director of the KPA Operations Department from 1994-97, when he was replaced by Ri Myong Su. He returned to the post in 2007, when Ri was moved over to the NDC. There is a rumor that Kim Myong Guk was briefly sidelined in 1996 after slipping up and revealing information about a secret underground bunker designed for Kim Jong Il.

Kim Myong Guk appeared 11 times with Kim Jong Il in 2008, seven of those were after Kim’s purported stroke. In the first quarter of 2009, he has made 11 appearances.

Little is known about Ri Jae Il, who began to rise in prominence (at least as far as his public appearances) in 2004, after he was promoted to First Vice Director of the Information [propaganda] and Agitation Department of the Central Committee of the Workers’ Party of Korea. Ri had been appointed Vice Director of the same Department in 2003. Prior to that, he was a Bureau Chief for information/Propaganda.

Ri Jae Il made eight public appearances with Kim Jong Il in 2008, seven of them after Kim’s stroke. He made 11 appearances in the first quarter of 2009.

Born around 1946, Kim Jong Gak is one of the leading figures in the Korean People’s Army. Kim was appointed Vice-Minister of the People's Armed Forces in 1992 (some sources suggest this took place in 1997), made full General in 2002, and was appointed First Vice Director of the KPA General Political Bureau in 2007 (though some reports suggest he took this position in 2000), where he effectively oversees propaganda and ideological guidance for the military. In 2008, it was rumored that he was fulfilling the role of Director while Jo Myong Rok was ill.

Kim Jong Gak is frequently chosen to deliver strong warnings to the outside world about North Korea’s military might and willingness to over-respond to provocations, and was one of the main speakers at a rally praising North Korea’s 2006 nuclear test.

Born in 1930, Ri Je Gang studied at Kim Il Sung University. Ri has been caught up in the soap-opera that is overseas observations of the palace dramas in Pyongyang. He is rumored to have been close to Ko Yong Hee (mother to Kim Jong Chol and Kim Jong Un), and is the rumored rival to Jang Song Thaek, whose return to power in 2006/2007 was seen as a counter to Ri’s rising influence in Party and Military promotions and affairs (Ri reportedly took over as Department Director for Structure Management when Jang was purged).

Five appearances with Kim Jong il int he first quarter of 2009, but prior to that, no appearances since June 2007.


(11) Ju Kyu Chang, Member of the National Defense Commission, First Vice Department Director of the Central Committee of the WPK

(12) Kim Yang Gon, Department Director of the Central Committee of the WPK, Member of the Presidium of the DPRK Supreme People's Assembly

Ri Je-gang died last night in a "car accident". The Chosun Ilbo is reporting that the elders surrounding Kim Jong Il are starting to drop like flies. Change in the air?